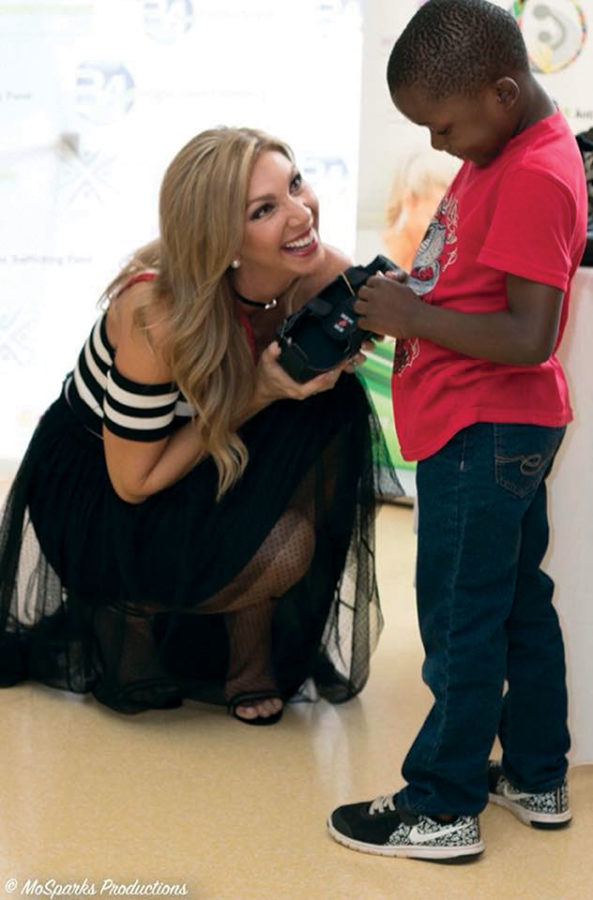 Gaston-Majors gives a child a pair of The Shoe That Grows.

In late December of 2017, Charity Gaston-Majors made her way to South Africa for the Mrs. World competition. Gaston-Majors finished the competition within the top six, against 36 other contestants from around the world. Despite her success as a pageant performer, Gaston-Majors never would have thought of herself as one.

“I was a sports girl, I was a personal trainer, I was in sweatpants everyday, so pageants weren’t even necessarily on my radar,” Gaston-Majors said.

Graduating college with an exercise science degree and a psychology degree with a coaching minor, Gaston-Majors became a personal trainer for the next 11 years. Along with that, she started her own nutrition business and opened up a private boutique fitness studio in downtown Boise, Idaho. After marrying and having a son, now one and a half years old, Gaston-Majors moved away from the entrepreneurial side of her career and began spreading her message.

“At my gym I had sponsored a couple pageant ladies that I knew… They just kept saying, ‘Charity, you should do it, you should do it.’… I am a firm believer in doing things that are new and doing things that scare you. Instead of always staying comfortable, doing things that force you to grow. So, I talked to people and they just kept saying that every woman steps into the best version of herself,” Gaston-Majors said. “I thought they were just pretty girls in a dress and come to find out they were some of the most amazing women that I’ve ever met, the most driven women that I have ever met. They are CEO’s, they are entrepreneurs, they own nonprofit organizations, they are moms. They’re just these great women, they are the movers and the shakers in the community, so they were my kind of people.”

Gaston-Majors soon realized what competing in national and international pageants really meant, and has now fully taken that idea under her wing.

“The idea for [competing in pageants] is that it’s a great way to amplify whatever message it is that you want to get across. What I like to say is that the sash and the crown, they’ll help get you in the door, but your brains and what you say and your contribution to the community is what will help keep you in the door,” Gaston-Majors said. “It has allowed me to make great connections in the community and in our state. So if I was to call a middle school or an elementary school or high school and say, ‘Hi, I’m Charity Majors and I would love to come speak to your school,’ they may or may not know who I am, but if I call and say, ‘Hi, I’m Mrs. Idaho or I’m Mrs. of the Americas, then all the sudden they perk up and they listen. [Then] I’m able to share a message of hope or inspiration or anti-bullying to the kids, and then it allows me to really be involved in the community and be that public spokesman and that public figure for a lot of different causes that I’m passionate about. It helps bring awareness to them.”

One such organization is The Shoe That Grows, a nonprofit organization that creates a shoe that grows in size for children in impoverished areas, including the US.

“I was able to bring 100 of ‘The Shoe That Grows’ to a couple different orphanages [in South Africa], and I wouldn’t have been able to do that if I hadn’t had the opportunity to go to Mrs. World,” Gaston-Majors said. “In third world countries, they don’t have the resources to buy more than one pair of shoes every year or every couple years… so ‘The Shoe That Grows’ grows in five sizes so they are able to keep them for a year or two. It just allows them to be a kid and go to school and continue their education. It’s just shoes that we don’t really think about that we can take for granted.”

Through her accomplishments and experiences in pageants, Gaston-Majors’ view of herself since high school has changed, giving her a better grasp of who she is and what her purpose in life is.

“Before, I didn’t necessarily know that I was beautiful, or if I did then I would get teased for it. I was nicknamed Volleyball Barbie, and just teased for the way that I looked and so a lot of times it felt like God made a mistake in the way that he made me,” Gaston-Majors said. “Now knowing that I was made this way for a reason, I can use things like pageants [to make a difference]. I used to have a TV show, I’m a public figure and I have a big social media presence, I can use my looks to gain people’s attention and then I can insert hope and life and challenge them to become a better person, and draw potential out of them with the words that I say.”

Not only does Gaston-Majors send her message out during pageants, but has also found her voice through many other means of communication.

“I have a travel blog called majorsadventures.com and I have a business blog at charitymajors.com. I am a speaker and an author now, so I just published a book called The Ugly Side of Being Beautiful. I have co-authored another book called Their Ceiling, Your Floor,” Gaston-Majors said. “Now I’m involved with an organization called Women Ignite International as a speaker, author and now I have a podcast and some online courses. In my free time, I dabble in pageants.”

Looking back at her high school career, Gaston-Majors wishes she would have realized that there is so much more to life outside of high school.

“There is so much more than prom and the volleyball games and the gossip that can go on or the bullying that can go on… [I wish I knew that] high school doesn’t define who you are and who you can be for the rest of your life. It’s a part of it, and you’ll take lessons with you as you go, but when you leave high school, you have a chance to create whoever it is that you want to be, and you can step into that person regardless of what people knew you as in high school,” Gaston-Majors said. “To adventure and to explore and to do things [even if you’re] afraid, those are things that I wish I would have done back then.”

The message that Gaston-Majors sends to current high schoolers is simple: be kind.

“A lot of times high school kids don’t feel good enough and you just never know what they’re going through behind the scenes, you never know what they’re going through at home, you never know what’s going on with their family or with their finances or with their grades, or with the things that are pivotal in their life,” Gaston-Majors said. “Every single person on the planet, they are one in, I think the number is, like 700 trillion of a chance to be here; there will never be another person exactly like them with the gifts that they have, with the things that they’re good at, with the way that they communicate, with the way that their brain operates, with the family that they’ve been given… They’re a soul and they’re a human being and they have greatness inside of them, so draw that out of them and treat everyone with kindness.”

For her future plans, Gaston-Majors is continuing to send out her message, though is focusing more on her upcoming books as her next step forward.

“I am about to go into a big launch for my book, and we’re already making plans for another book as well. [I’ll be focusing on] expanding my speaking career; we’re growing Women Ignite International, we’re hoping to take it to Australia this year in 2018 and put on a big conference there,” Gaston-Majors said. “We’re potentially going to be on the Dr. Oz show and maybe Oprah’s Super Soul Sunday, so cross your fingers for us.”