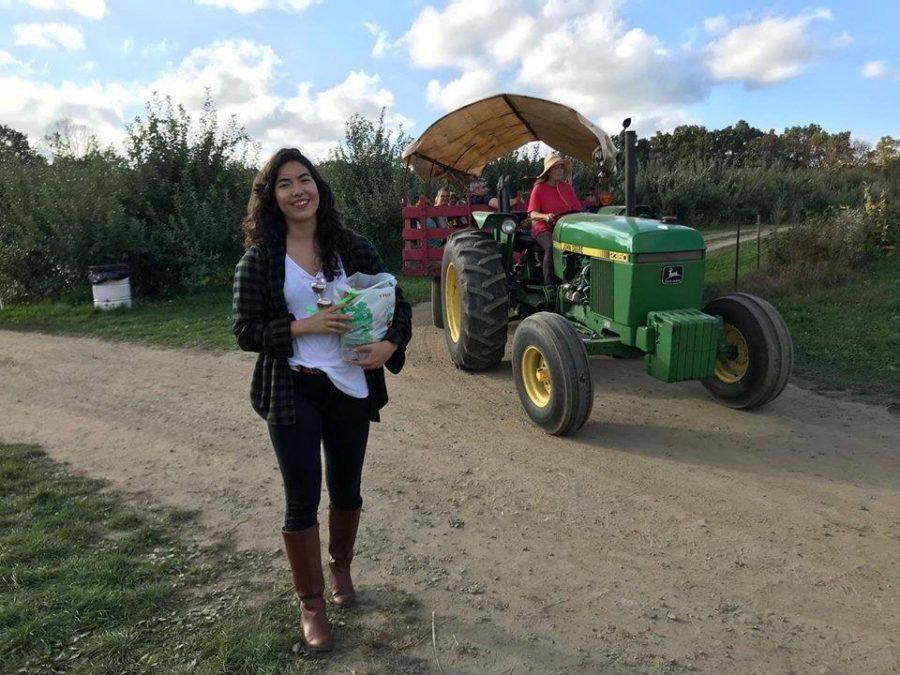 Muan takes some time off to pick some apples at an orchard.

After graduating from Virginia Tech in 2017, Gina Muan moved to Boston, Massachusetts. Muan is currently working as a process development engineer for Seres Therapeutics, a microbiome company that focuses on clostridium difficile (an inflammation of the colon). On a typical day you can find her working on bioprocesses in the lab.

“I was always interested in math and science, so that’s why I decided on an engineering path. I wouldn’t say it’s my passion, that’s a little extreme, but I was always very interested in it. I knew it would give me a solid career choice, and it was something I could build my mind with. Also, I’d always been interested in bioprocesses, and helping people out in their health,” Muan said.

While she did move from Harrisonburg to Boston to pursue her career, Muan has also traveled outside the United States.

“When I traveled to Australia for the first time to see one of my relatives, I think I kind of got bit by a traveling bug; it’s what made me want to go completely out of my comfort zone and take a whack at being in a different state for a little while,” Muan said. “I think if I hadn’t traveled, I would have just gotten a job somewhere in Virginia, close to home… but I really just wanted to see new places.”

Although Muan is doing a job that she likes to do, she would’ve liked to give herself some advice during high school.

“I wish I could tell myself to just not feel bad if what you do isn’t your passion. I feel like a lot of people go to their job and think that it isn’t really what they live to do, and I don’t think it’s realistic to have that kind of point of view. I guess it would’ve saved me a couple of years of questioning myself if I’d known that ahead of time. And, I would say to stop straightening my hair in the morning, because that took way too much time,” Muan said.

While she took time to focus on school work, Muan also participated in extracurricular activities.

“I did band for a while, and I was part of a scholastic bowl. That sort of started out as a joke, but that was interesting, but definitely the most memorable thing, and the activity that I spent the most time on was tennis,” Muan said.

In Muan’s experience, Boston has a different vibe from Harrisonburg, in both the emotion and the opportunities.

“Harrisonburg is cool and all, but it never really felt like there was much excitement or passion in the place, and I feel like [in Boston], even just catching lunch with a friend, it’s really fun to feel that energy, and that’s one of the things I enjoy the most about living [in Boston],” Muan said.