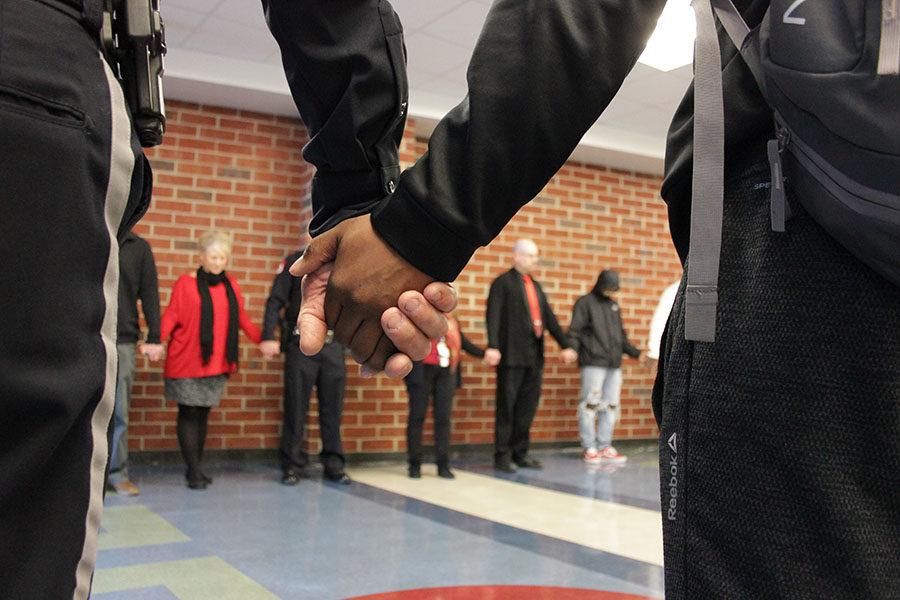 Members of the community join hands in recognition of the shooting at Stoneman Douglas High School. HHS spent 17 minutes holding hands in a unity chain around the halls to show their support.

Every inch of the 280,000 square-foot building fell silent at 10 a.m. Mar. 14. Shortly after, the words “Never again” were chanted in unison among all 1,800 individuals lining the hallways. At this moment around the nation, schools showed their recognition for the school shooting in Parkland, FL and the 17 lives that were lost. These schools conducted their own ways of recognition, while HHS did so by creating a “unity chain” consisting of the entire staff and student body. With the help of Superintendent Dr. Scott Kizner, the Mar. 14 event was planned by a group of HHS students, including seniors Karina Vasquez-Murillo and Dharakshan Shaikh. The two seniors, along with other students, were approached by principal Cynthia Prieto due to their organizing of a walk-out two years ago.

“I think it was really important [for students to know that they] have a voice in different things… When someone dies in a public school setting [like] we’re in right now, it kind of affects everyone,” Shaikh said.

On this day of recognition, all students and teachers stepped out of their classrooms and held hands, lacing through the HHS hallways. Students held up posters, others quoted the powerful words of Stoneman Douglas student activists and the 17 names of each victim were announced over the intercom. For the leaders of the walk-out, it was important that students realized that no matter what issue may appear, they have a say.

“I hope that HHS students learn that… even if they think their opinion doesn’t matter, it actually does matter and that they can actually have a voice and actually have an impact in our school community,” Vasquez-Murillo said. “This is a big school and you might feel small, and this is a way for us to get comfortable with one another.”

In addition to having a voice, leaders aimed to give students the opportunity to express how they feel about school shootings, and realize that HHS holds a safe environment.

In preparation for the event, leaders and organizers only had one week, which they used to make posters (close to 200 of them), write scripts and schedules and make final arrangements. Junior Farah Raghab took on the duty of poster-making, many of which said things like “Books not Bullets”, “Enough is Enough” and “Arms are for hugs not shooting.”

“We wrote our posters with famous quotes on them from Barack Obama and Emma Gonzalez,” Raghab said. “I feel like it could have happened to us and we would want people to stand with us too, so we took the opportunity to stand with [Stoneman Douglas High School] and do something where they would feel supported.”

To show Parkland the support, a photo booth was set up at all lunches, and the photos were meshed together into a video and sent to Stoneman Douglas High School.

“I [am excited to see] how Parkland is going to react to it, [and] that they know that other schools are with them, like schools in Harrisonburg where no one knows where this is,” Shaikh said.

Amongst many messages that HHS wanted to send to Parkland, they also wanted outsiders to know the kind of community there is behind its walls.

“The message that I hope gets across is that Harrisonburg High School is…  a school that really likes to connect with one another and really likes to send out messages and speak up and not actually do and not just stand there,” Vasquez-Murillo said. “We want them to know that we are growing as a community and we are going to keep being who we aspire to be and that we just hope to be an inspiration to other schools to have a community like ours.”