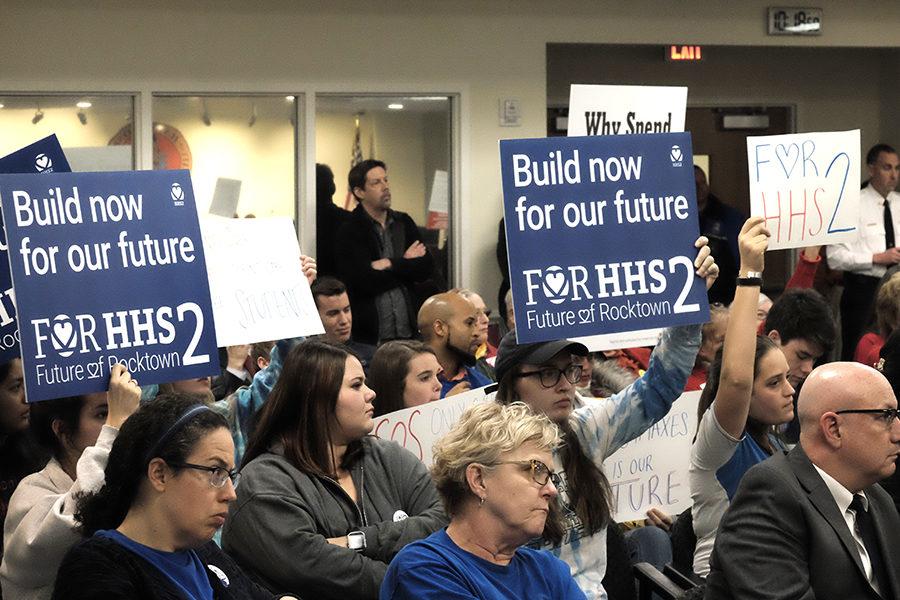 The Harrisonburg School Board has voted unanimously to build a second high school, but that doesn’t mean anyone’s laying bricks just yet. The city council has yet to approve funding for the project, an estimated $76 million, which would require three of the five council members to vote in the motion’s favor.

The vote, expected to take place later this month, will wrap up a spirited year in local politics. In 2017, concerned members of the Harrisonburg community stormed city council meetings to voice their opinions about the second high school. Some encouraged the council to build it, while others warned against the tax increase such an expenditure would create, proposing cheaper alternatives like building an annex to the current high school, for instance, or moving ninth grade back to middle school.

This discussion gave rise to two interest groups: For HHS2 and their opponent, Students Over Structures. When the latter put up red signs around town that read, “Tell City Council & School Board, Students Over Structures[,] No $100 Million Dollar [sic] High School,” For HHS2 made signs of their own, blue ones that said, “Build now for our future.”

What many don’t realize is that all this talk of a new high school is not new. The HHS2 issue has been stewing in the local consciousness lately, but the school board has discussed it for years.

According to superintendent Scott Kizner, when the current high school opened in 2005, 1,300 students were enrolled, just 50 students shy of the architect’s recommended capacity. The school board hadn’t expected such rapid population growth in the window of time between their approval of the architectural plans and the grand opening of HHS. Old agendas of school board meetings reveal that this miscalculation didn’t go unnoticed, either. The question, “So, when are we going to build this new high school?” has arisen time and time again, met on each occasion with concern.

This academic year, HHS is more than 500 students over capacity.

It has become clear that the school can no longer function as intended. During the fourth lunch period, added this year to accommodate the growing student body, the cafeteria has run out of food to serve students. With too little instructional space inside the building, 150 students attend at least one class per day in six, newly-erected outdoor classrooms. What’s more, HHS can no longer hold school-wide assemblies. There’s just not enough room in the auditorium.

On December 12, superintendent of Harrisonburg City Schools Scott Kizner gave a presentation to the council that outlined the school board’s solution to the overcrowding: a second high school. Representatives from both For HHS2 and Students Over Structures attended.

It was at this meeting that Kizner unveiled the cost estimate for the new school, $76 million, a figure adjusted for inflation in 2021, the year the school is projected to open its doors. This estimate marks a dramatic decrease from the original, $100 million, at the expense of certain facilities, including an auxiliary gym and a football stadium.

“The current proposal for the second school is a compromise,” For HHS2 said in a statement to “The Newsstreak.” “It will rely on some facilities at the existing HHS. It has room for future expansion of core facilities, but additional money, time and effort will be required.”

Students Over Structures argues that despite the school board’s efforts to cut costs, Harrisonburg still can’t handle shelling out $76 million, according to their website.

“The Harrisonburg City Council and School Board has [sic] their priorities wrong,” the group said on its website. “Tax dollars should go to helping children learn, not building temple[-]like buildings that have atriums and marble floors. Prioritize students learning, not building excessive structures… Our group is a grassroots effort to inform… residents of Harrisonburg of the countless reasons why the city should choose a more fiscally sane solution.”

In a past meeting, councilman Jones dismissed these concerns.

“You’re going to have taxes,” Jones said. “You’re going to have an increase in taxes, because we’re going to keep increasing your services. If we want to talk about services that you don’t want to have – I doubt anyone wants to have that conversation. Nobody’s walking in here saying, ‘Hey, you know what? I don’t think we need these things anymore.’ No one’s doing that. That’s why we live in a city. We like our services… We want to continue to develop the best thing we can for our students.”

The agenda for the council meeting on January 9, which promised a “discussion regarding the construction of a second high school,” left many hopeful that the vote would happen that day. Once again, the council chambers filled up with spectators eager to see a slice of Harrisonburg history first hand.

They were left disappointed, however. Councilman Christopher Jones said he was prepared to vote in favor of a second high school but noted that his colleagues seemed hesitant.

“I do think we need some more time to run [the] numbers,” Jones said. “I don’t look to delay the process. I don’t think anyone here is prepared to second the motion I’m prepared to make.”

The vote is now slated for the council meeting on Tuesday, January 26.

For HHS2 criticized the move on their Facebook page, writing, “Delaying…sound familiar?! How long does council need to ‘digest numbers’ that have been there for more than a year[?]”

“By not making a motion to vote, council members have jeopardized the opportunity to open a new school in 2021,” they said in their statement. “This decision has real consequences – both personal and fiscal. Every year of delay means another year of overcrowding at HHS and higher construction costs due to inflation.”

Indeed, the school board’s cost analysis determined that the price of building materials for schools rises four to six percent each year. Should the new high school open in 2022, a year off schedule, the city would have to pay anywhere between an additional $3,000,000 and $4,500,000. That’s not pocket change for a city like Harrisonburg, whose economic resources are limited by its size and median income.

Superintendent Kizner is crossing his fingers that the council acts now to avoid these unnecessary expenditures.

“If they vote on the 23rd, we’ll still be able to open up in 2021,” Kizner said. “We’ll just have to consolidate some of the planning process to move it along a little faster.”

Kizner admits that he would have preferred more money allocated to the new high school, but his vision for the project is nevertheless ambitious. He proposes a building designed to accomodate what he calls “future learning,” where instructional spaces can be easily configured to suit multiple purposes.

“Right now, in our current high school… there’s not a lot of moveable space [where] teachers can bring in a couple classes to work together. I would like to see more open space,” Kizner said. “If you visit the two middle schools, you’ll see what I’m speaking about… For example, at Skyline Middle School, the eighth grade band students and the STEM students were working together on designing mouthpieces using 3D printers. It was a big, open space with the right kind of technology.”

Additionally, he wants to address some of the architectural shortcomings of HHS. For starters, there’s no dance studio, which means dancers are displaced when the theatre and band programs rehearse in the auditorium. Piano students are also at a disadvantage. The band room at HHS doesn’t have enough room to set up keyboards, so piano classes have to take their place in repurposed classrooms. Kizner is entertaining the idea of a piano “center” at the second high school to provide pianists with a little more elbow room.

Of course, all these plans are irrelevant unless the council votes “yes” later this month. Councilman Jones is the only assured vote. The other council members have remained tight-lipped in the past few meetings. The outcome of the vote is anybody’s guess, but one thing’s for sure – however it turns out, not everyone is going to be happy. In the January 6 meeting, Jones reminded the public of the priority everyone has in common.

“The crown jewel… is always going to be the children,” Jones said. “Whether you think that you should build now and build for the future or you think the students should be over the structures, however you want to phrase it, what we can’t have are our guidance counselors and our cafeterias… unable to meet the needs of the students.”

See the results of the vote and the controversy preceding it.