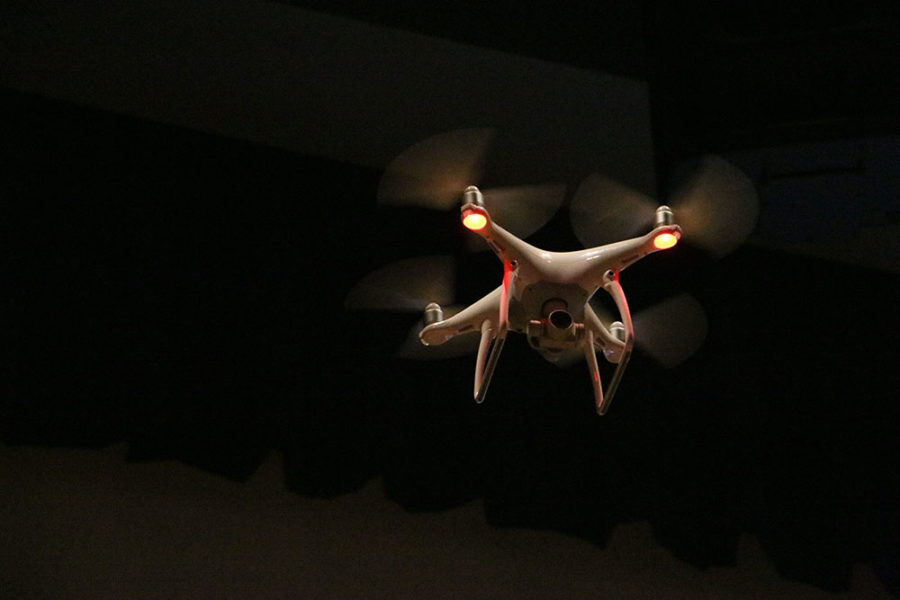 A drone is flown around the auditorium as part of a Fire Department demonstration.

As the drones took flight in the auditorium Monday evening, the Harrisonburg Fire and Police Department explained how they use this technology to conduct search and rescue. The fall STEMinar began with the annual Soup Night Potluck with parents and students. Everyone then moved to the auditorium where Unmanned Aircraft Systems and Robotics Coordinator, Paul Helmuth, presented and demonstrated the new technologies that HFD and HPD have available for their use. A STEMinar is an event held each semester where the students and parents involved in the Governor’s STEM Academy attend and listen to a guest speaker. Veteran STEMinar attender, senior Jacob Blagg, was one of the many students eager to listen to the things Helmuth had to say.

“It was amazing to see them actually fly the drones inside. Some speakers in the past have not been that interesting but this year was great because he engaged the audience. The powerpoint was set up well, containing videos of how they actually used the drones,” Blagg said.

In addition to drones, Helmuth also presented a robot that helps with adding another perspective on the ground during an operation. The robot contained a camera, and the STEM students were able to view live footage from both the drones and the robot.

“I did not know much about this topic going into this so it was eye-opening to see the many technologies [first responders] use while in the field,” Blagg said. Specific uses of robots and drones during an operation include: finding someone who is injured or lost because drones can cover more ground effectively, police pursuits and infrared camera technology which allows professionals to locate something or someone at night. Robots can also stand in for humans in dangerous situations such as fires.

The next STEMinar will be in the Spring of 2018 with another guest speaker undecided at this time.