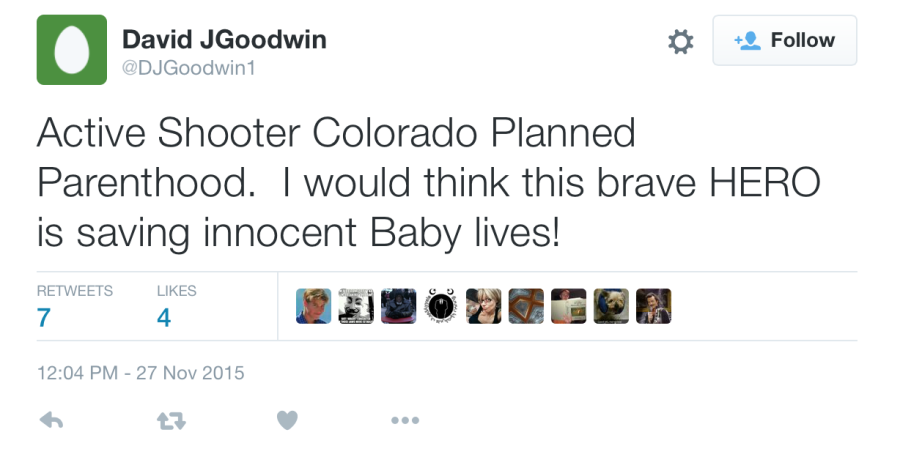 Screenshots of tweets By Samantha Little

On Friday, Nov. 27, the day after most Americans gave thanks for their life, family and friends, a man walked into  a Planned Parenthood clinic in Colorado Springs, Colorado and began shooting. The suspected gunman is fifty seven year-old Robert Lewis Dear and took part in a six hour standoff at the clinic that left three dead and nine wounded. Of those three that lost their lives, Ke’Arre Stewart and Jennifer Markovsky were civilians in the clinic at the time of the shooting, and Garrett Swasey was a six-year veteran of the UCCS police department that died in the several hour long attack. All three of them left behind two children and families.

Dear is said to have anti-abortion and anti-government views but it’s still unclear what his motive was. While he may or may not have gone into the clinic shouting “Pro-life”, there were many pro-lifers on twitter that were in support of his actions. I strongly believe in the freedom of speech and that everyone should be able to voice their own thoughts but tweets such as “No sympathy for any pregnant female who was injured in the Planned Parenthood shooting that was there to get an abortion. She deserved it.” went too far in my opinion and I began to question the user’s humanity. Saying a woman deserves to be injured or even killed because she is making a personal decision involving her own body is outrageous. Even without dragging politics and religion into this, no one should wish pain or suffering onto someone and find it acceptable for that to happen.

Two other tweets that I found questionable were “Active shooter Colorado Planned Parenthood. I think this brave HERO is saving innocent baby lives,” and “Planned Parenthood kills a million babies and no one bats an eye, but one brave hero tries to put a stop to that [and] everyone loses their minds.” I was shocked by these tweets for two reasons. The first being the fact that these people called Dear a “hero” as if walking into a building with the intent to kill people is a heroic deed. That is, in a way, disturbing and makes me genuinely concerned for them if that is what they truly think of this Dear and his involvement in this situation. The next reason was how the concept of being pro-life and what these people are saying clash. I find it very ironic for someone to proclaim that they’re pro-life but congratulate a man who killed three other human beings. To me, it doesn’t sound like they’re truly in favor of everyone having a chance to live. But, I won’t tell them how to live their lives, that’s their decision. 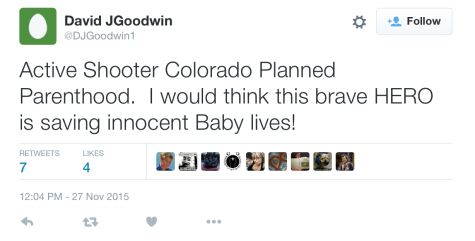 Screenshots of tweets By Samantha Little